Home » Board of Visitors » Joe Bragger 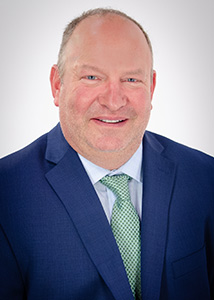 Joe Bragger was elected president of the Wisconsin Farm Bureau Federation on December 9, 2019, after serving on the WFBF Board of Directors since 2010. Joe represents District 4, which consists of Buffalo, Trempealeau, Lacrosse, Jackson, Monroe and Eau Claire County Farm Bureaus.

Joe farms with his wife Noel, brother Dan Bragger along with a dedicated team of employees. Bragger Family Dairy maintains a herd of 300 dairy cows, 32,000 pullets. The family also grow 1,400 acres of crops consisting of corn, corn silage, alfalfa, soybeans, winter rye and malting barley. Bragger Family Dairy was chosen as one of the first Discovery Farms, which was a great opportunity to monitor and demonstrate agricultural environmental stewardship.

In 2011, the Bragger family received the Wisconsin Leopold Conservation Award, which recognizes those who inspire other landowners by example and help the public understand the vital role that private landowners can and do play in conservation success.

Joe has served on many committees and organizations including: Past treasurer, president-elect and president of the Wisconsin Soybean Association; vice chair and committee chair for the Wisconsin Discovery Farms Steering Committee where he helped direct agricultural environment research on a diverse group of Wisconsin farms.

Joe completed a three-year committee involvement on the Special Oversite Committee rewriting  nutrient management standards to be presented to NRCS for final approval. He also has participated in several township and county level committees having to do with land use planning and conservation, as well as being an active participant in several university extension research projects.

Joe is active in his community and served as president of the Independence School District Board of Education since 2010. He also served on several committees at St. Peter and Paul Catholic Church including education, buildings and grounds and finance council.

Joe is a graduate of Western Wisconsin Technical College. He and Noel have four children who they are very proud of:  Rosli, John, Tessa and Allison.